Slash Gets Star On Hollywood Walk Of Fame - Noise11.com 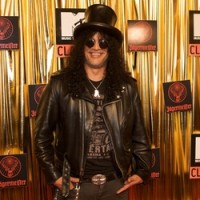 Slash Gets Star On Hollywood Walk Of Fame

Slash has been honoured with a star on Hollywood’s Walk of Fame.

The iconic musician, real name Saul Hudson, was accompanied by his wife Perla and his two sons, Cash, eight, and London, nine, to the ceremony.

The former Guns N’ Roses rocker was beaming from ear to ear as his star was unveiled and happily posed for pictures with his family.

The actor paid tribute to Slash, sharing memories of their friendship and past party days.

“It’s quite fitting that Slash is getting a star on the very street Axl Rose will one day be sleeping on,” he was quoted as saying by Rolling Stone magazine. “This star is going to be stepped on more than the coke we did in the Eighties.”

He has gained critical acclaim, several awards and collaborated with a string of stars during his solo career.

His latest album Apocalyptic Love was released in May.

The Hollywood star comes less than three months after Slash was inducted into the Rock and Roll Hall of Fame.

Eagles and Guns N' Roses are reportedly among the musicians who have received financial support during the COVID-19 crisis.

Check out the new Gilby Clarke video ‘Rock n’ Roll Is Getting Louder’.

LISTEN: New Ozzy Osbourne Music Due Out In February

Ozzy Osbourne is proving himself to be an unstoppable force once again, with a new album due out in February.

Rose Tattoo will play a two nights at West Hollywood’s Whisky A Go Go in 2020.

AC/DC may announce a world tour as early as next week if rumours are true.