Something For Kate Announce Details Of First Album in Eight Years - Noise11.com 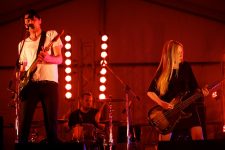 Something For Kate photo by Ros O'Gorman

Something For Kate Announce Details Of First Album in Eight Years

Something for Kate will released ‘The Modern Medieval’, their first album in eight years in November.

“We make Something for Kate records because we love making them,” says Paul Dempsey. “Every song we work on is a concentrated effort. It has to be right. For me, that means not a word out of place and not a note out of place. That takes a lot of time, but no-one lets anything slide in this band.”

Something For Kate fans have been thrown another bone with the third single ‘Supercomputer’.

Tagged as: 90s, alternative, Australia, Melbourne, rock, Something For Kate

Gloria Estefan Is Recovering From Coronavirus

Gloria Estefan has urged fans to continue taking the COVID-19 pandemic seriously after she was forced into quarantine following a mild case of the coronavirus.