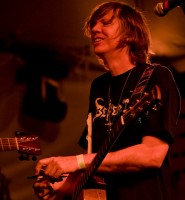 Husband and wife rock couple Thurston Moore and Kim Gordon of Sonic Youth have split after 27 years of marriage.

The break-up has also put a cloud of uncertainty over the alt-rock pioneer group.

Moore and Gordon formed Sonic Youth with Lee Ronaldo in 1980.Thurston and Kim married in 1984.

A statement from the band’s label Beggars Group says, “Plans beyond that (November) tour are uncertain. The couple has requested respect for their personal privacy and does not wish to issue further comment.”

Sonic Youth are due to recommence touring on November 5 in South America.

The couple has a 17-year daughter Coco who is the lead singer in Massachusetts band Big Nils.