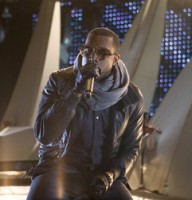 Soul singer Syl Johnson has taken exception to a sample in a bonus track on Jay and ‘Ye’s Watch The Throne.

Billboard reports that longtime blues and soul man Syl Johnson is taking legal action over what he claims is copyright infringement, regarding a sample used in the Watch The Throne bonus track ‘The Joy’.

The sample is from his 1967 hit ‘Different Strokes’, which has been used by Wu-Tang Clan, Public Enemy, Kool G Rap, Get Boys and many others over the years.

He filed a complaint in an Illinois court, claiming Jay-Z, Kanye, UMG and Def Jam are profiting from the unauthorised use of the song without credit or payment.

He also claims that West tried to get permission to use a sample of the song on My Dark Beautiful Twisted Fantasy, and was refused.

The artists who sampled the song above were all ones that paid up for it, but Johnson has attempted to sue Michael Jackson and Cypress Hill for using the same song in the past.