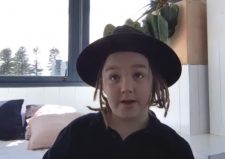 Taj wrote the song with his buddy Jacob Hunt. The video was shot around Mudgee in New South Wales.

“I’m happy that I made it onto the charts with my very first single I’m getting ready to work with some pretty cool writers and producers- can’t wait to see where that goes” said Taj.

“I am thrilled for Taj and his family When you consider the thousands of songs that are updated daily to iTunes – it’s quite an accomplishment,” says manager Scott Dorsey.

Taj has appeared of The Ellen DeGeneres Show after gaining social media momentum with his YouTube videos. His version of Chris Stapleton’s ‘Tennessee Whiskey’ has generated around seven million views.

Halsey has been granted an emergency restraining order against an obsessed fan.

Country singer Jade Holland had to use technology to complete her latest song ‘Do It Right’.