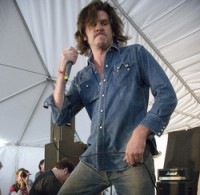 Tex Perkins of The Cruel Sea. Photo by Ros O'Gorman.

Tex Perkins will introduce his newest band Tex Perkins & The Ape in January.

Tex Perkins of The Cruel Sea. Photo by Ros O'Gorman.

Tex was cagey when he hinted at the impending birth of The Ape in interviews last year but with less than two weeks away more has been revealed.

Tex Perkins & The Ape will make their first public appearance on January 10 at the Torquay Hotel and also play the following night (January 11) at the Portsea Hotel.

Expect some new music from The Ape but the setlist will include songs from across Tex’s various musical eras.

The Getaway Plan will release their third album ‘Dark Horses’ in July.