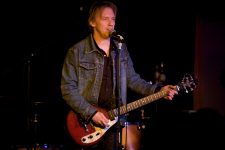 Michael Spibey of The Badloves photo by Ros O'Gorman

The Badloves have premiered their video for ‘Tribal’ with Screaming Jets guitarist Scott Kingman handling the video production.

The ‘Tribal’ video features the recent live performance from The Badloves during isolation captured for streaming:

‘Tribal’ has been part of The Badloves recent setlists. “Fleeting glimpses of the song have been caught leading up to the release,” Michael Spibey tells Noise11.com. “It’s a pretty exciting time to release something especially during this time we are in. Its nice to let something be liberated. I can’t move around too much but the song can”.

The song began three years ago. “The start of song was created in late 2017,” Michael says. “Its been a really long path of getting it airborne. Its taken a lot of effort. That’s unusual. It’s a simple enough song. It’s taken a lot of energy from a lot of people to get it up”.

This one song has taken longer to release than the first Badloves album to create. “This has been very long. The weird thing is we have been playing lots as a band. There’s been a thousand songs written. It’s been continuous. The release schedule has been nowhere and we are now catching up with it. There are a lot of new songs backed up in a queue and that’s a good feeling. We are addressing that lacking part of our output”.