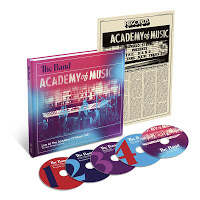 The Band Live at The Academy of Music

The band’s classic 1972 double album, Rock of Ages, is being expanded to four-CDs and 1-DVD for Live at the Academy of Music 1971, out on September 17 from Capitol/UMe. A shorter 2-CD set will also be released.

Live at the Academy of Music 1971 features new stereo and 5.1 Surround mixes, including 19 previously unreleased performances and newly discovered footage of two songs filmed by Howard Alk and Murray Lerner.

The album is produced by Robbie Robertson, with co-producers Michael Murphy and Matt D’Amico. The stereo mixes for the first two discs and the DVD’s 5.1 Surround mix were done by Bob Clearmountain, with the stereo mixes for discs 3 and 4 helmed by Sebastian Robertson and Jon Castelli, assisted by Ryan Nasci. The collection was mastered by Patricia Sullivan at Bernie Grundman Mastering. The concerts were originally recorded by Phil Ramone with Mark Harman.

The first two CDs of the set present performances of every song played over the four night stand at New York’s Academy of Music selected by the producing team.

Discs three and four contain the entire New Year’s Eve show which was previously excerpted on Rock of Ages. Robertson said of the recording “This is like being there. It was the final night; there was a thrill in the air. We were excited about New Year’s Eve, and then Dylan joined us for the encore. When he came out, we thought we could wing it, and wing it we did. We thought, ‘We’re not gonna fall off this wire.’ That whole night had a bit of magic to it.”

The DVD has a 5.1 Surround mix of discs 1 and 2 plus Alk and Lerner’s filmed performances of King Harvest (Has Surely Come) and The W.S. Walcott Medicine Show.

The deluxe package also comes with a 48-page hardbound book with previously unseen photos, a reproduction of Rolling Stone’s original Rock Of Ages review by magazine co-founder Ralph J. Gleason, an essay by The Band’s Robbie Robertson, and appreciations of The Band and the set’s recordings by Mumford & Sons and Jim James of My Morning Jacket.

Disc 4 [CD] – New Year’s Eve At The Academy Of Music 1971 (The Soundboard Mix)
Life Is A Carnival
King Harvest (Has Surely Come)
Caledonia Mission
The W.S. Walcott Medicine Show
The Night They Drove Old Dixie Down
Across The Great Divide
Unfaithful Servant
Don’t Do It
The Genetic Method
Chest Fever
Rag Mama Rag
(I Don’t Want To) Hang Up My Rock And Roll Shoes
Down In The Flood (with Bob Dylan)
When I Paint My Masterpiece (with Bob Dylan)
Don’t Ya Tell Henry (with Bob Dylan)
Like A Rolling Stone (with Bob Dylan)
Disc 5 [DVD]
Live At The Academy Of Music 1971 in 5.1 Surround Sound
Archival Film Clips – December 30, 1971
King Harvest (Has Surely Come)
The W.S. Walcott Medicine Show

Tagged as: Bob Dylan, Live at the Academy of Music, Robbie Robertson, The Band

Bob Dylan On Track for UK Number One

Bob Dylan is on course for his ninth Number 1 on the UK’s Official Albums Chart with Rough and Rowdy Ways.