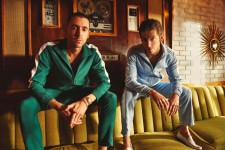 The Last Shadow Puppets will an EP featuring covers of Leonard Cohen and The Fall in December.

The Last Shadow Puppets is the other band of Miles Kane of The Rascals and Alex Turner of Arctic Monkeys.

‘The Dream Synopsis’ EP is set for release on Friday 2nd of December 2016.

According to EMI Records, “The EP was recorded live in one day at Future-Past Studios, Hudson NY and features new versions of album favourites ‘Aviation’ and ‘The Dream Synopsis’ alongside a selection of cover versions, first heard live during The Last Shadow Puppets’ summer touring”.

The video of their cover of Leonard Cohen’s ‘Is This What You Wanted’ was directed by Focus.