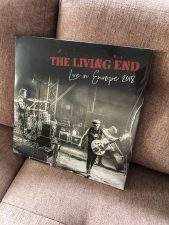 The Living End Live In Europe 2018

The Living End’s first-ever live album ‘Live in Europe 2018’ is nearing its released date on 30 November but fans at their recent shows had the chance to grab a pre-release edition.

‘Live in Europe 2018’ was recorded over three shows in Europe this year. It is being bundled with vinyl edition of the new studio ‘Wunderbar’ but only 1000 copies will be produced.

It’s nearly ready for your ears… only available at Sound Merch. pic.twitter.com/Fl3PcFnsbI

Cliff Williams Says Malcolm Young Would Like AC/DC ‘Power Up’

Cliff Williams hopes the late Malcolm Young is “looking down” on AC/DC and “liking” their new record.

A signed copy of John Lennon's 'Double Fantasy', signed by Lennon for murderer Mark Chapman just hours before Chapman killed Lennon, is up for auction.