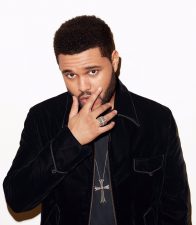 The Weeknd has set his sights on landing a “dream” cameo in The Simpsons after poking fun at himself on animated TV hit American Dad.

The Weeknd made his debut on the latest episode of Seth MacFarlane’s longrunning series, in which the cartoon version of The Weeknd confessed that despite his sexual boasts in his music, he is actually a virgin.

He also premiered a new song, appropriately titled I’m A Virgin, written for American Dad, which aired in the U.S. on Monday.

“I always wanted to play a character that was the opposite of the public’s perception of me – and of course make fun of myself,” the musician told Variety.

“Once I was given the opportunity I took complete advantage. (Writer/producer) Joel Hurwitz believed in the vision and he helped execute it beautifully.”

“I want to continue to create different Weeknds in alternate universes,” he explained. “I told (Hurwitz) I loved doing voices and wished I could have challenged myself more in that department, so he took me to the Robot Chicken studio, where Seth Green was waiting for me. I totally geeked out and he actually let me do multiple voices on an episode coming out soon. The cartoon nerd in me jumped out that day.”

Now The Weeknd is eager to land a guest appearance on another iconic animated series: “It’s going to be hard to beat (American Dad) in the TV cartoon world, but an obvious bucket list would be to work on The Simpsons,” he gushed.

Appealing to creator Matt Groening and his fellow producers, the singer added, “That would be a dream – and if they’re reading this, I actually have a pretty cool idea if they’re down.”

The Simpsons officials have yet to respond to The Weeknd’s public proposal.