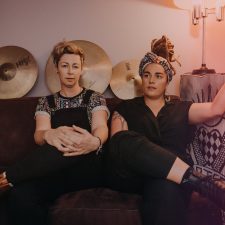 Leisha Jungalwalla and Cat Leahy from This Way North have introduced their new star Hector the van for the new video ‘Driving Roads.

“We have spent the past three years touring full time and living in Hector, driving city roads, country roads, back roads and highways to get from show to show,” says guitarist/singer Leisha Jungalwalla.

‘Driving Roads’ was recorded in Nashville in January 2020. You’ll find it soon on This Way North’s ‘EP Vol 3’. “Driving Roads is very much an ode to the open road, capturing our love for adventure and the excitement that comes with that—it’s so visceral. We love nothing more than taking a road we’ve never been on before.”