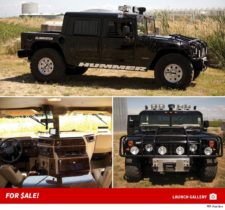 RR Auction relisted the Hummer and estimated that this time round it would only reach around $100,000 (£77,000) when the bidding closed on Thursday (17Aug17) at midnight.

Tupac’s Hummer was a relatively new purchase when the rapper died in a drive-by shooting in 1992 – he had only owned the truck for a month before his untimely death, and the vehicle had only clocked up 10,101 miles.

The black Hummer had been customised to his rap star tastes and boasted diamond plated bumpers and an external PA system.

It also featured beige leather interior throughout with a wooden trim and a top of the range sound system of the time, with speakers and a CD deck.

The truck also boasted a personalised license plate which read “YAKNPAC”, in honour of both its famous owner and fellow late rapper Yaki “Prince” Kadafi.

The California Love singer’s Woodland Hills pad, which he moved into in 1995 following a stint behind bars and called home until his death, is also up for sale and expected to sell for around $2.66 million (£2 million).

RJ Bond the Director of Tupac Assassination 3 : Battle For Compton returned to the Murder Master Music Show where he dropped a bombshell about the late Tupac/Death Row Body Guard Frank Alexander where he witnessed him about to draw down on Suge Knight at the Magic Show in Vegas in '09.