What Does Mental As Anything Have In Common With Bruce Springsteen? - Noise11.com 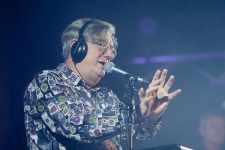 What Does Mental As Anything Have In Common With Bruce Springsteen?

Mental As Anything’s classic ‘Live It Up’ gets a run in the new movie ‘Blinded By The Light’, the story of journalist Sarfraz Manzoor and his love of Bruce Springsteen.

‘Live It Up’ was written by the band’s co-founder and last original member of the band Greedy Smith. It also appeared in Paul Hogan’s ‘Crocodile Dundee’.

‘Blinded By The Light’ was approved by Bruce Springsteen who also allowed his music to be used in the film. Bruce also handed over the unreleased ‘I’ll Stand By You’, written and rejected for a Harry Potter movie.

Tagged as: 80s, Australia, Blinded By The Light, Bruce Springsteen, Mental As Anything, pop, rock