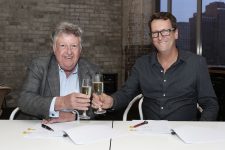 Denis Handlin AM, Chairman & CEO of Sony Music Entertainment Australia and New Zealand and President, Asia said, “We are delighted to welcome Robert and Ambition Entertainment to the Sony Music family. Robert and his team have developed a very strong strategic vision for their artists and built an excellent catalogue. We look forward to creating many successful projects together in the future.”

Robert Rigby founded Ambition Entertainment in 2009. The main label of the company, Fanfare Records has developed into one of the most successful Australian adult music record labels in rock, blues, country and contemporary genres.

Rigby said, “from the beginning, the vision for our company was to become a major player in the adult contemporary music market. Joining forces with Denis and the Sony Music team in our new distribution partnership heralds a new era in our business”.

Brian Cadd’s second and third albums ‘Parabrahm’ (1973) and ‘Moonshine’ (1974) have been released on CD for the very first time and with bonus tracks.

The music of Kevin Johnson is available again for the first time in decades.