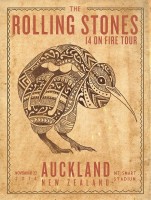 The Rolling Stones will play their final show of 2014 in Auckland, New Zealand on Saturday and voting is now open for the show.

New Zealand fans get to choose from the following songs for the request slot in the Stones setlist:

The artwork for the Rolling Stones Auckland show has also been revealed show the Stones tongue logo on a kiwi in Maori style colouring.

There are no more shows scheduled for the Rolling Stones after Saturday’s Auckland performance although Keith Richards indicated earlier in the year that the band is planning South America dates in April, 2015. However, when talking to the New Zealand Herald this week he was less forthcoming with future plans “It’s impossible to say with this band, considering how long it’s been going on. Everyone seems to be ‘where are we playing next’ so I’m letting it roll with these boys. I’ll hang in with them,” he said.

View the Rolling Stones photo gallery from the Melbourne show by Ros O’Gorman.

Bruce Springsteen opened up his Auckland, New Zealand show with a cover of Lorde’s ‘Royals’ this weekend.

The Jacksons New Zealand date for next week has been cancelled.

When you head to Big Day Out take note of the Red Hot Chili Peppers backdrop. It will feature digital art from Sea Shepherd Australia.

Red Hot Chili Peppers have reached the southern hemisphere and played the first show of the 2013 tour in Auckland last night (January 14).

Lady Gaga Hit In The Head At New Zealand Show

Lady Gaga suffered a slight concussion after receiving a hit to the head while performing in Auckland last night.

A Facebook page appears for fans to swap Radiohead Australian Tour tickets, or buy them without dealing with scalpers.

A recent Foo Fighters show in New Zealand actually showed up on the Richter Scale.