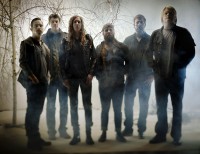 Underoath will return to Australia in February for the ‘Underoath Reunion Tour’.

The time between Underoath breaking up and reforming was less than the average band takes to release a new album. Had they never mentioned it, no-one would have been any the wiser…but they did.

Underoath started to reactive in January 2015 ironically when they got back together to make a documentary about their breakup. They got on so well working on their ‘divorce’ that they decided to ‘remarry’. The band officially announced they had reformed on August 17, 2015.