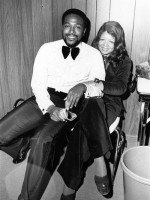 Anna Gordy Gaye, the wife of soul legend Marvin Gaye and older sister of Motown founder Berry Gordy, has died at the age of 92.

Gordy and Gaye married in 1964. She was 17-years older than Marvin. They had three children, Marvin III, Nona and Frankie, and divorced in 1977.

Anna co-wrote the songs ‘Flyin’ High In The Friendly Sky’ and ‘God Is Love’ on Marvin Gaye’s iconic ‘What’s Going On’ album. She also wrote the hit song ‘Baby I’m For Real’ and ‘The Bells’ for The Originals, the band she signed to her Anna Records label.

The Originals – Baby I’m For Real

The Originals – Baby I’m For Real

Anna was a constant source of inspiration for Marvin Gaye’s songwriting. ‘Stubborn Kind Of Fellow’, ‘Pride and Joy’ and ‘You Are A Wonderful One’ were written about their relationship.

As the Marvin Gaye/Anna Gordy marriage started to breakdown Marvin documented the break-up in song that became the ‘Here, My Dear’ album in 1978.

The couple were back on friendly terms in the 1980s. Anna attended the 1983 Grammy Awards to watch Marvin receive his awards for the ‘Midnight Love’ album, featuring one of his greatest hits ‘Sexual Healing’.

Marvin Gaye was shot dead by his own father one year later at the age of 44.

Anna did not remarried after her divorce. She died at her home in Los Angeles on January 31, 2014.