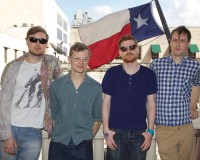 The video has been created by Django Django bassist Jimmy Nixon and London based film-maker Dan Brereton (Superman/Batman). The aesthetic puts together home videos on a mobile phone using a 24-hour cycle and stop frame animation and the result is flawless.

More recently the band created a song for the film Slow West which has been met with rave reviews and won the Grand Jury Prize at the Sundance Film Festival. The film was written and directed by Dave’s brother John Maclean.

Previously in 2015 Django Django released four songs; ‘First Light’, the first from their new album ‘Born Under Saturn’, ‘Beginning To Fade’ released on Record Store Day, ‘Reflections’, a huge floor-filler that swirls with sophistication, and the epic garage pop of ‘Shake and Tremble’.

The Falls Festival in Lorne is already sold-out but here are 28 more acts you will see if you scored a ticket.

Sydney and Melbourne will be treated to a busy January with Falls sideshows announced for Soak, The Macabees, Gary Clark Jr, Discloure, Django Django, Halsey and Foals.

The first line-up for the Falls Festival for 2015 has been revealed.

iHeartRadio Music News, powered by Noise11.com has a big week of guests in the green room this week with appearances from Paul Weller, Built To Spill, Django Django and Jamie Lawson.

Django Django have announced a new December tour which will see the band visit Derry, Glasgow, Manchester and Birmingham.