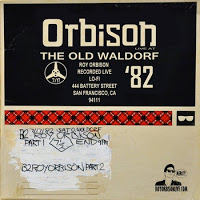 The family of Roy Orbison has released the second album in their bootleg series of concerts and the first submitted by a fan.

Mercy Records was recently started by the family to bring rare recordings of Orbison to his fans. While their first release, Live at Reseda Country Club 1981, came from their own archives, the new release (Live at the Old Waldorf ’82) is the first to come from a campaign to have fans submit bootlegs they may have recorded from throughout Orbison’s career.

The show was recorded on 1/4″ tape by fan Dan Celli on July 17, 1982 at The Old Waldorf in San Francisco. Along with all the hits, the show included the relatively rare Go! Go! Go! (Down the Line) and the song Roy recorded with Emmylou Harris, That Loving You Feeling Again.

Mercy Records does warn those thinking of purchasing the set that it is, in fact, a bootleg and won’t have the quality of a sound recording.