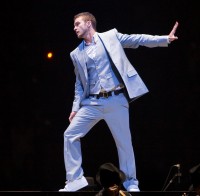 Justin Timberlake dropped a new track from his latest album after making a triumphant return at the 55th Annual Grammy Awards on Sunday night.

After taking to the stage at the prestigious music event, Justin’s team announced the release of new song Mirrors from his upcoming third album, The 20/20 Experience.

The personal track follows on from Justin’s comeback single Suit & Tie featuring Jay-Z, and the star’s management were thrilled to announce his newest offering on the singer’s Twitter page.

So far, fans have been treated to lead single Suit & Tie, Little Pusher Love Girl, which Justin performed at the Grammys, and That Girl, which he debuted at a recent Super Bowl charity party.

Justin had a storming night on Sunday – wowing crowds with his performance at the star-studded Grammys.

Beyoncé Knowles and Ellen DeGeneres introduced the hunk’s return to the stage.

“This performance marks a man who was born to make music,” the Destiny’s Child star gushed.

The 32-year-old singer gave a show-stopping performance, backed by a big band and joined on stage by Jay-Z. The heartthrob showed off his famous dance moves dressed in a dapper black Tom Ford suit with a bow tie, cummerbund and black and white shoes.

Justin was joined by wife Jessica Biel at the event, who was seen sharing a joke or two on the front row alongside power couple Beyoncé and Jay-Z.

Beyoncé Knowles will release a new album on November 24.

Katy Perry was only one of the many stars who have taken to social media to send their well wishes to victims of the tornado that has devastated central Oklahoma.

Baby You Can Ride My Streetcar Sings McCartney In New Orleans

Ke$ha Looking For Man Or Woman To Love

Ke$ha is looking for a 'boyfriend or girlfriend'.

Rihanna shocked a waiter by leaving a $200 tip over the weekend.

Beyonce Knowles has reunited with Destiny's Child to record a new track.