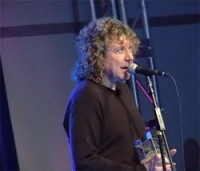 Led Zeppelin will soon be on the big screen. A movie version of their London O2 concert from five years ago will be released to cinemas and then DVD. It has been titled ‘Celebration Day’.

Major premieres are being planned around the world for the October release with Robert Plant, Jimmy Page and John Paul Jones planning on walking the red carpet in certain territories for the move release.

Led Zeppelin broke up in 1980 after the death of drummer John Bonham. They have only reunited for Live Aid in 1985 and then for this show in 2007 to pay tribute to Atlantic Records founder Ahmet Ertegun who died in 2006 after falling at a Rolling Stones concert and hitting his head.

Plant, Page and Jones performed with John’s son Jason on drums. 20 million people from around the world applied for the 18,000 tickets available by ballot.

Led Zeppelin started teasing a hint of the release five days ago. The world premiere of the movie will happen on October 17, 2012.

The tracklisting for the movie is:

David Letterman will interview the surviving members of Led Zeppelin on his show on Monday.

The surviving members of Led Zeppelin held a press conference this week in London to talk about their new concert movie 'Celebration Day'.