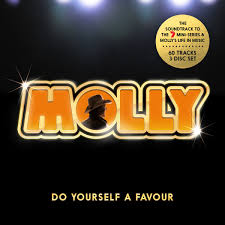 After last weeks leap to No.1 for the “Molly” TV Soundtrack, it holds for a second week atop the ARIA Albums Chart this week after the second and final part of the mini-series screened last Sunday night.

“Molly” is the first TV Soundtrack to hold for a second week at the top since “Glee: The Music Volume 3, Showstoppers” (31-May, 2010; 2 weeks) and the first album for the Liberation label to stay for two weeks since the Jimmy Barnes set “The Rhythm and the Blues” (from 7-Sep, 2009; 2 weeks). And with a new doco about Molly screening this Sunday night, the set might hold for a third week, although the new Hilltop Hoods restrung album and Wolfmother sets both came out on Friday and could contend for the top spot next week.

Adele holds at No.2 for another week with her “25” set, helped possibly by her singing at The Grammys this past week, and at No.3 for a third non-consecutive week is David Bowie with “Nothing Has Changed: The Best of”, which is now spending its sixth week within the Top 10, his longest run for one of his many compilations since “ChangesOneBowie” (HP-8×5, peaked July/Aug 1976, pre-ARIA) spent seven weeks within the ten. The other David Bowie set within the Top 10 this week is his last studio album “Blackstar” which is down two to No.9 and also racking up its sixth week within the ten, with his last studio album to spend this long within this region of the chart was his last No.1 album “Let’s Dance” (25th April, 1983 pre ARIA) which initially stayed within the Top 10 for six weeks, before eventually racking up 19 weeks in the ten later in 1983.

The third album for Sydney group The Jezabels debuts at No.4 entitled “Synthia”, becoming the bands third Top 5 album and (so far) lowest entry position, as their first two albums both debuted and peaked at No.2, “Prisoner” (26-Sept, 2011) and then the follow-up “The Brink” (10-Feb, 2014). Down a place to No.5 is Justin Bieber with his “Purpose” album, and the second and final Top 10 debut of the week is the tenth solo studio album for Ronan Keating entitled “Time of My Life”, which comes in at No.6 and is his first new album in three and-a-half years, his last set was “Fires” (HP-12, 10-Sept, 2012). This also becomes his seventh Top 10 album in Australia from the eleven he has charted so far (10 studios and 1 best of), and his last Top 10 appearance was with the album “When Ronan met Burt” with Burt Bacharach (HP-3, peaked May 2011).

UP: The two big Grammy winners this past week are both sitting just outside of the Top 10, with Kendrick Lamar and “To Pimp a Butterfly” back up five to No.11 and winner for ‘Album of the Year’ was Taylor Swift with “1989” which rises back up two places to No.12, whilst another winner in The Weeknd sees his “Beauty Behind the Madness” return to the Top 20, up five to No.17. “The Very Best of The Eagles” is up six to No.20, and it was last within the Top 20 back in April 2014, whilst the soundtrack to “Straight Outta Compton” jumps back up seven to No.22. Leaping into the Top 40, up thirty-nine places to No.32 is the Skyhooks compilation “Hits’N’Riffs” and Bring Me the Horizon jump back up eighteen to No.33 with their former No.1 set “That’s the Spirit”. Meaghan Trainor is back up eleven to No.34 with her “Title” set and Courtney Barnett jumps back up twenty-eight to No.36 with “Sometimes I Sit and Think…”, and Rod Stewart returns to the Top 100 with his 2008 compilation set “Some Guys Have all the Luck”, which previously peaked at No.49 in late July 2015 and hits a new peak of No.37 this week. And thanks to her announced October 2016 tour and new Top 50 single, Ellie Goulding’s latest album “Delirium” bullets back up sixty-one places to No.38 and returning to the Top 50 are Elle King with “Love Stuff” (52 to 41), “Best of Bowie” for David Bowie (82 to 46), “1000 Forms of Fear” for Sia (91 to 48) and “Walking Under Stars” for The Hilltop Hoods (61 to 49).

The new Ryan Reynolds film “Deadpool” opened around the world last week and the soundtrack debuts at No.18 this week, featuring music by the artist Junkie XL as well as older titles for Juice Newton, Salt-N-Pepa, Neil Sedaka, Wham! and this weeks No.54 debut for DMX “X Gon’ Give it to You”.

“Rocket Man: The Definitive Hits” for Elton John is back up eight to No.64 and the Australian Crawl “Greatest Hits” set climbs back up twenty-eight to No.66 and “Revival” by Selena Gomez is back up fifteen to No.73 and “Guardians of the Galaxy” soundtrack rises up seventeen spots to No.79. “The Complete Greatest Hits” for The Eagles drops down twenty-three places to No.96 this week and is the only new album certification of the week, now sitting at 4x▲Platinum in sales.

Soprano and Opera singer Nicole Car sees her first chart entry this week at No.74 with “The Kiss”, and current tourists here Simply Red are new at No.78 with “Big Love: Greatest Hits 30th Anniversary Edition”, whilst the third and final new entry in the lower fifty is the soundtrack/cast recording to the musical “Cats” at No.95. This becomes the third edition of the musical to chart, as back in 1985 (when it first opened here); the Original Cast Recording made it to No.19 and the Australian Cast Recording went to No.44, both sets returning for an encore performance in March 1989 in the lower fifty too.