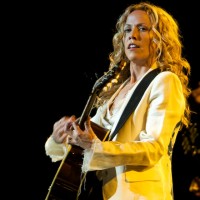 Sheryl Crow was the Rolling Stones special guest in Chicago on Friday night.

Crow joined The Stones for their ‘Exile On Main Street’ track ‘All Down The Line’.

It was the second time Sheryl had performed with the Rolling Stones. She was the ‘Honky Tonk Woman’ for the Stones at Madison Square Garden in January, 2003.

At the Chicago show Friday the guest choir for ‘You Can’t Always Get What You Want’ was the Roosevelt University Conservatory Chorus. Mick Taylor performed on both ‘Midnight Rambler’ and ‘(I Can’t Get No) Satisfaction’ as well as ‘Can’t You Hear Me Knocking’ which has only been played on this tour once before in Los Angeles.

The Stones also performed their rarely played ‘Shine A Light’ at the show. They last played it in 2007 and have only ever played it 20 times (including last night’s show in Chicago).

You Can’t Always Get What You Want (with the Roosevelt University Conservatory Chorus) (from Let It Bleed, 1969)
Jumpin’ Jack Flash (single, 1968)
(I Can’t Get No) Satisfaction (with Mick Taylor) (from Out Of Our Heads, 1965)
The next Rolling Stones show will be June 3, once again in Chicago.

The Rolling Stones have released a memoir from their London concerts a few weeks ago. ‘Hyde Park Live’ is a download only album available through iTunes.

The Rolling Stones completed their 50 and Counting tour in London’s Hyde Park on Saturday with a final grand tally of 62 songs performed across the 29 shows (including warm-up gigs).

The Rolling Stones have wrapped up their ‘50 and Counting’ 50th anniversary show at Hyde Park in London.

The Rolling Stones have returned to play Hyde Park, London for the first time since 1969 with Gary Clark Jr as their special guest.

Brad Paisley was the special guest of the Rolling Stones in Philadelphia on Tuesday night.

Win Butler Of Arcade Fire To Perform With The Rolling Stones

The Rolling Stones replaced one of their own songs with ‘Six Days On The Road’ when blues legend joined the band on stage in Chicago on Tuesday night.