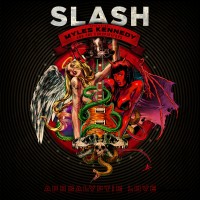 The record will be called Apocalyptic Love. Singer Myles Kennedy (formerly of Alter Bridge) has been upgraded to the band’s full time singer after having previously contributed two songs to the guitarist’s self-titled debut and toured as the band’s live vocalist.

The album will be released in May by the guitarist’s own label DikHayd (say it out loud and giggle) via Roadrunner Records in Europe and Asia and Sony in Australia.

If Slash doesn’t quite cut it, then you can at least hold out the vain hope that Gunners will reform for their induction into the Rock ‘n’ Roll Hall of Fame. They aren’t quite confirmed to perform yet, but at least they’ll be in the same room as each other.

Alter Bridge will release their fifth studio album ‘The Last Hero’ in October. The first single from the album is ‘Show Me A Leader’.

Disturbed Recruit Myles Kennedy For ‘The Sound of Silence’ in Houston

Myles Kennedy of Alter Bridge became “Art Garfunkel to my Paul Simon” for David Draiman and Disturbed in Houston this week.

For the first time ever in ARIA Albums Chart history, the top six albums are all new entries, with the closest previous effort occurring on 24th May this year when we had the top four as all new entries, prior to that it last occurred on 30-Nov-1997 with another top four, but never the top six.