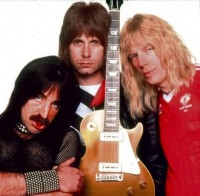 Actor Michael McKean, who played David St. Hubbins in the Spinal Tap movie, is in hospital in New York after being struck by a car while walking. His leg was broken in the accident.

McKean also played Lenny in Laverne and Shirley and was the Brady’s next-door neighbour in The Brady Bunch movie. He is currently starring on Broadway in ‘The Best Man’.

Michael was hit at the corner of 88th and Broadway just before 3pm on Tuesday. He was taken to St. Luke’s Hospital in a critical condition but was later upgraded to stable.

A representative for McKean says that the actor is fine and in good spirits. Because of the accident, 64-year old McKean has broken his record of never missing a performance.

The driver’s windscreen was smashed in the accident. A garbage bin and post box was knocked over in the crash. Police have no laid criminal charges over the accident at this stage.