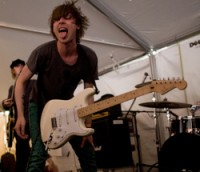 The Vines at the Aussie BBQ at SXSW

The Vines will release their new album Wicked Nature in September.

The Vines have been a mercurial band since they arrived in 2002. Their talent took hold when the debut album ‘Highly Evolved’ launched them as one of rock music’s new saviours. It was a height though that the volatile band was never going to maintain for long. At some point the tales took over the talent like their namesake camouflage. They have been hidden for a while but to the bands credit they just kept writing and recording.

On ‘Wicked Nature’ frontman Craig Nicholls makes his debut in the role of record producer. He co-produced disc one with regarded Australian tape loving analogue producer Paul McKercher (You Am I) and then he assumes full control over the production duties for the second disc.

‘Wicked Nature’ is the bands first independent release. The album will be released on a new label of the same name. It will include a physical release on both double CD and double gatefold vinyl in the UK, Europe, USA, Japan, and Australia, and all other territories digitally.

Pledge Music are working with The Vines on a series of exclusives in the led up to the album release. These offers will all be exclusive to Pledge Music and include personally autographed copies of the vinyl from the band.

The first glimpse of the bands new music is a signature shortie ‘Out The Loop’ that starts and ends it’s garage charged run at just 1min 23 seconds. It can be heard on trailer for the new album https://www.youtube.com/watch?v=9LEzT0S42cg and the bands Soundcloud at https://soundcloud.com/thevines/out-the-loop/s-8U3OP

The first single proper is ‘Metalzone’ which is being released worldwide in the week commencing July 14.

Tagged as: The Vines, Wicked Nature

The Vines To Reunite To Tour With Jet

The Vines ‘Winning Days’ line-up will reform to tour Australia with Jet in May and June.

The Killers Are Covering Different Aussie To Each Hometown

The Killers have been adding a local flavour to each of their Australian shows by covering Australian artists from the city they come from at each gig.

The Vines’ Craig Nichols and Empire of the Sun/PNAU founder Nick Littlemore have teamed to become White Shadows.

The birth of alternative Australian rock has been documented in ' Dirty Jeans: The Rise of Australian Alternative Rock', the latest heritage compilation from Warner Music.

Craig Nicholls Of The Vines Arrested On Assault Charges

Craig Nicholls, the frontman for The Vines, was arrested on Saturday after he allegedly went into a violent rage at his parent’s house in Sydney.

Jebediah, The Grates And The Vines Kick Off Stonefest

Canberra’s Stonefest is on for another year and features a mammoth line-up of Australian talent.