4/5’s of Axiom Will Perform In Melbourne This Weekend - Noise11.com 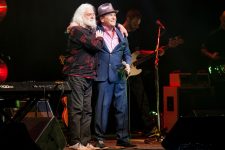 4/5’s of Axiom Will Perform In Melbourne This Weekend

Melbourne is in for a classic rock treat this weekend. Brian Cadd and Glenn Shorrock will perform at The Palms at Crown on Friday and Saturday night. Chris Stockley will be on guitar and Doug Lavery will be on drums. That is 4/5’s of Axiom.

Before Glenn found international fame as Little River Band lead singer, before Brian became one of Australia’s most important and prolific singer songwriters of the 70s, Glenn, Brian, Chris and Doug were Axiom (with Don Mudie).

The show is not just Axiom. “We do The Twilights and The Groop things,” Brian Cadd tells Noise11.com. “It’s a look backwards. At some point we get to the Axiom thing and it is suddenly revealed that there are a couple of other members of Axiom, in fact all of Axiom except for Don Mudie who hasn’t played for many years. For that 15 or 20 minutes everyone is in Axiom mode. The majority of people in the audience really remember that period. They are 15 or 16 back in those days. We are taking them way back and when the guitar solo happens it is THAT guitar player (Chris Stockley) and when the drums count in it is THAT drummer (Doug Lavery)”.

Axiom has never really had a reunion tour. “At one stage we were asked if we would do an Axiom show but it was a very narrow period,” Brian says. “It was only a couple of years. We felt like we had more to say. In those days you could get five singles and two albums out a year. We got a lot of stuff done in a couple of years but it narrowed the focus down so much that it was hard to figure out how to get the other 40 years in”.

Axiom albums are now as rare as the proverbial hens teeth. They aren’t available for streaming and the physical discs are long out of print. “The reality is the early stuff that included ‘A Little Ray of Sunshine’ and ‘Arkansas Grass’, all those things, that was sold off to Warners from Fable,” Brian says. “During the period when Little River Band was breaking it seemed like a good time to sell the Axiom masters. The later masters belonged directly to Warners and no-one at Warners has ever really thought about it. Glenn A Baker did it as an anthology and that exists”.

After two albums and a couple of years Axiom split. Don Mudie has been with Brian Cadd in The Groop and continued as a duo for one single after the split of Axiom. “Don and I joined the second incarnation of The Groop,” Brian says. “That was the version that had the hits. That’s when Don and I started writing together and I wrote all the songs during that period for The Groop. Them Don, Glenn and I formed Axiom. Don and I wrote all that the stuff. After Axiom ended we continued as a duo but it wasn’t something that was every going to work. The music we made at the very least needed a band. We were on Happening 70, it was just me on the piano and him on acoustic guitar and it just didn’t work. It didn’t look right. It wasn’t something either of us wanted to particularly pursue. Don and I had it a bit. He was the guy who was our absentee manager. I think he ground to a halt, was sick of being on the road, married a wonderful woman and was in the process of early kiddom. So when he got out, he got right out”.

Despite the short period of time, Brian says it was work well done. “I feel really good about the work we did. I feel it went down as some of the best work of the late 60s”.

Brian Cadd and Glenn Shorrock will play The Palms at Crown this Friday and Saturday. You’ll find tickets here