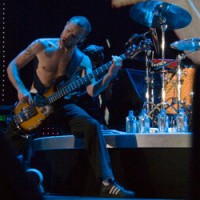 The supergroup consists of Radiohead’s Thom Yorke, Flea from the Red Hot Chili Peppers, and Radiohead’s regular producer Nigel Godrich, Joey Waronker (who has worked with Beck, R.E.M., Smashing Pumpkins and more), and Mauro Refosco of Forro in The Dark. After years of teasing, they’ve finally planned a release.

Late last year Flea said that their debut album was almost done, then Yorke and Godrich slipped Atoms For Peace songs into a DJ set a couple of months back in LA. Now they have announced a 12-inch record featuring a remix and their own track.

Spin reveal that the record will feature a remix of ‘Tamer Animals’ by an Oklahoma band Other Lives and their own tune is actually a remix too, of a song titled ‘Other Side’ .

It’ll be out on August 3 through Modeselektor, and there will be a digital version. Sample the Other Lives remix below.