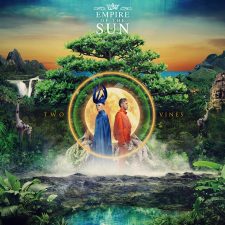 Empire of the Sun Two Vines

Empire of the Sun has released ‘Two Vines’ the title track of their upcoming third album.

“There was an image we talked about very early on with this record before we wrote the title track, Two Vines, and that was this image of a modern city overtaken by jungle, almost like mother nature taking back the planet. All the buildings will turn back to sand. All it will be is nature again. We wanted to make something that reflected the beauty of that,” Nick Littlemore said in a statement.

Earlier it was revealed ‘Two Vines’ will feature Fleetwood Mac’s Lindsay Buckingham as well as members of Prince and David Bowie’s bands.

The song ‘High and Low’ was also previewed earlier this week.

‘Two Vines’ is due in October. The album was recorded in Hawaii and Los Angeles. The album is co-produced by Empire Of The Sun and Peter Mayes (Sia, The Killers, Mika), alongside long-term collaborator, Donnie Sloan (Midnight To Monaco).

Dreams, the side-project of Daniel Johns from Silverchair and Luke Steele of Sleepy Jackson and Empire of the Sun, will release their debut album ‘No One Defeats Us’ on September 14.

The new Daniel Johns and Luke Steele collaboration Dreams has a music video for 'No One Defeats Us'.

Silverchair’s Daniel Johns and Empire of the Sun’s Luke Steele have combined for a new band they like to call Dreams.

Coachella 2017 has its biggest Australian contingency in ages. The Avalanches, King Gizzard & The Lizard Wizard, Pond and Empire of the Sun are some of the names playing at the US music festival in April.

Empire Of The Sun have completed their third album Two Vines and it will feature some impressive names.