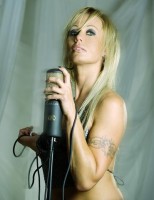 In 1996, after making a huge impact with relentless touring, creating a new hybrid of techno and alternative rock, and releasing five albums, cult heroes Def FX went their separate ways.

In 2011, it was announced that they’d play once more, and dates were settled at the very beginning of 2012 for a tour which many diehard fans thought would never happen.

We spoke to Fiona Horne, captivating frontwoman of the band, about the why, how, and what of the Def FX reunion.

“It does bring back a lot of memories, especially since I wrote a lot of the lyrics,” she ponders about relearning the songs, “It’s interesting going back and thinking ‘Wow’. Reading a lot of the esoteric leanings of the songs – I went on to write books about witchcraft after the band broke up – I think ‘Gosh, I’m still that same girl’ even though many years have passed.”

One of the hallmarks of the band was their seemingly never-ending tours, experience sure to pay off for the reunion shows, which went on sale today.

“Live, we carved out a really unique niche for ourselves. Our live shows were a guaranteed awesome night out, whether you liked our music or not,” she laughs, “The music was always goin’ off. We were known for that – the energy on stage. But it was also the audience. There was a tremendous sense of community; of a Def FX community.”

For these new shows, Horne and bass player Martyn Basha have brought in Clan Analogue founder Ant Banister to recreate the electronic parts, as well as Marty’s current bandmate and guitar slinger Wiley Cochrane, who Horne tells us “sounds like Blake, our original guitarist, who was quite sonic” combined with the “heavy, chopping style of Dave Stein, our second guitarist”.

The shows are certain to be true to the band’s heritage as trailblazers and performers  Horne insists she can still do her patented backbends and they are keeping the original techno sounds despite massive leaps in technology.

As for whether there might be more dates, Horne is quick to say, “We’d go and play 40 days in a row if people want to see it” but she does aver that they have to be “practical as well as enthusiastic”. So we might expect more shows if the three reunion shows sell well.

When it came to picking supports, Horne says that they were considering bringing back The Mavis’s and Caligula, and are “thrilled” that ‘90s industrial act Insurge have joined the tour.

Check out the whole interview below, where Horne covers everything Def FX, including the way they got the band back together, whether their music has aged badly, filming the Sydney show, possibilities of re-releasing their albums (they’ve found old masters!), and, personally, her skydiving world record.

Tickets for the Def FX reunion tour are on sale now through OzTix.

Daft Punk climbs a place from their No.2 debut last week to claim the ARIA Singles Chart crown with the track “Get Lucky”, making them the first French Group to take the honor, plus the track is now Gold (●) in sales.

Pink had the biggest selling album of 2012 in Australia with 'The Truth About Love.

Paul and Dan Kelly, The Bamboos with Tim Rogers, Lanie Lane, and more will perform at the 2012 Jagermeister Independent Music Awards.

Here is the line-up for Parklife 2012 and it includes The Presets, Nero and Passion Pit as well as Plan B, Tame Impala and Chairlife.

Beck and Sigur Ros Expected To Appear On Harvest Festival, 2012

Fans of Sigur Ros and Beck fans had better make sure they have some festival money lying around because the second annual Harvest Festival is expected to be announced soon and according to one industry insider, Sigur Ros and Beck going to be on it.