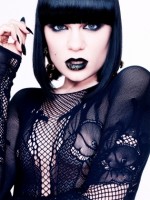 Jessie J has announced she is going to shave her head for charity Comic Relief in 2013.

The ‘Domino’ singer is going to go bald for Red Nose Day – the biennial BBC comedy telethon founded by Richard Curtis and Lenny Henry – and made the official announcement on her twitter page this afternoon (13.09.12) after telling fans last year that she would crop her hair for charity.

Writing to fans on the social networking site, she said: “I am SO excited and honoured to be able to finally officially announce I will be shaving my head LIVE for you ALL to watch in March 2013 for @rednoseday. (sic)”

Famed for her hit ‘Price Tag’, the star joked that “it is all about the money” – at least this time.

Explaining that she has been waiting for the perfect time and charity, Jessie J urged her fans to get involved in the charity.

She tweeted: “I have spent a long time making sure that when I do shave my head I raise as much money as possible for charity.”

Hurts have announced they will release 'Blind', the second single from their new album 'Exile', on 12th May through Major Label and have announced a UK and European tour in October and November, which will be the bands biggest tour to date.

Mel C reveals that she and comic Jack Dee nearly met their maker on a recent African adventure.

One Direction To Release Blondie Cover For Comic Relief

The world's biggest pop band, One Direction, have teamed up with the UK charity, Comic Relief, to record the official 2013 Red Nose Day charity single, creating their own unique take on the Blondie classic 'One Way Or Another.'