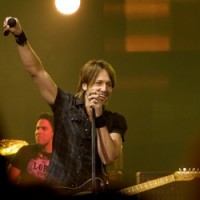 The actress is married to the country music star and American Idol panellist.

However Keith didn’t feel the need to give her tips for her stint as Cannes critic, according to USA Today.

“He’s not given me any advice,” Nicole laughed during a news conference which introduced the jury.

Keith will join her at the French gathering once his duties on the talent show are completed for the season at the end of the week.

Nicole admits how weird it is that they have both taken up similar roles at the same time but on opposite sides of the planet.

“It’s strange we’re back-to-back doing this,” she pointed out. “But at the same time, we both love what we do and we’re huge fans of what we do. That’s something that’s encouraged me.”

Despite knowing the boss for a while she has never been in his company for so long.

“I’ve known Steven a long time, and I never got to spend two whole weeks with him,” she explained. “So I am really looking forward to this.”

To get to Abbey Road studios, of course! Sir Paul McCartney dropped into the studios he and his fellow Beatles made famous, yesterday (23 July), to do a (not so) secret gig showcasing some new songs from his forthcoming album, Egypt Station, and some from his illustrious past.

Sir Paul McCartney can add yet another award to his trophy case, to go along with his Oscar, 8 BRITs, 18 Grammys, and 22 NME awards, to name but a small few.

The imaginatively titled, The Beatles, more commonly referred to as the White Album, will be 50 years old this November.

Aretha Franklin has been going through something serious medically the last few years, but nobody but her closest confidants know what it is.

Matthew Sweet And Susanna Hoffs Release Under The Covers Volume 3

Seven years after covering the 60s and four years after taking on the 70s, Matthew Sweet and Susanna Hoffs are back redoing the music of the 80s with Under the Covers, Volume 3, out November 12 from Shout! Factory.

Peter Cetera's home in Ketchum, ID is currently being threatened by the wildfires that have spread to 126,000 acres in the area.