Loretta Miller and Her Boyfriends to replace Alma Zygier at MEMO Music Hall for Summer Sounds of St Kilda - Noise11.com 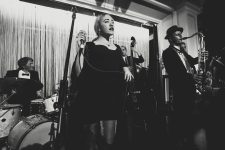 Loretta Miller and Her Boyfriends

Loretta Miller of The Dusty Millers will replace Alma Zygier at MEMO Music Hall on January 19.

Alma was announced as one of the acts for MEMO’s Summer Sounds of St Kilda but fell ill over New Years and needs to rest up and is taking a break during January to recharge. She has passed on that she’s looking forward to performing later in the year at MEMO.

Loretta Miller and Her Boyfriends will playing “swinging blues and spooky ballads”. Loretta sources her influences through the music of Dinah Washington, Julie London and Patsy Cline.

The Summer Sounds of St Kilda kicks off tonight 8 January, 2019:

26 January, Deitra Farr and The Redeemers with Lily & King

Memo Music Hall To Jazz Up Ahead of Melbourne Cup

Memo Music Hall will become Melbourne’s jazz hub in a lead-up to Melbourne Cup. The iconic Melbourne music venue will host the Memo St Kilda Jazz Summit for the three days leading up to the Melbourne Cup.

The 11th annual Heart of St Kilda concert has another top shelf tine-up of talent for 2018.