2 Chainz Wants A Piece Of The Hawks - Noise11.com 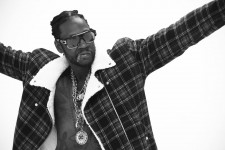 2 Chainz Wants A Piece Of The Hawks

Rapper 2 Chainz is eager to join the ranks of celebrity sports team owners with a stake in his beloved Atlanta Hawks basketball franchise.

2 Chainz is a regular courtside at the Philips Arena, where the Hawks play at home, and he’s such a big fan, he reveals he would love the opportunity to become a part-owner.

“If it happens it happens,” the former college basketball player tells TMZ.com, “but I’m definitely interested.

“It would be exciting to get a percentage, get my own parking space… you know, live it up.”

If 2 Chainz’s dreams come true, he will join the likes of Usher, who is a minority owner of pal LeBron James’ Cleveland Cavaliers, and Nelly, who has a small stake in the Charlotte Hornets.

Jay Z also served as a co-owner of the Brooklyn Nets, but sold off his shares in 2013 to avoid a conflict of interest after launching his sports management firm, Roc Nation Sports.

2 Chainz is quite the entrepreneur, as he is also the owner of record label The Real University (T.R.U.). 2 Chainz contributes to charity via proceeds earned from T.R.U.’s Ugly Christmas Sweater line of clothing and most recently he was able to help disabled veteran Dierdre Plater through his philanthropic organisation TRU Foundation by paying her rent for a year and providing furnishings for her previously empty home.

The rapper believes it is imperative he use his wealth to give back to those in need, writing on his website: “I remember when we didn’t have hot water and I didn’t want my friends to know , so I told them it was something wrong with that bathroom and they couldn’t use my mommas, I remember using the oven to heat the house , I would stand in the kitchen for hours to stay warm . I remember waiting until the water co. Close at 5 ,so we could use a tool and turn the water back on until 6 a.m. , I remember going to sleep hungry , i remember a long a*s extension chord coming from the neighbors house to mine to borrow they’re lights ,I remember stealing cable , cars , clothes etc, no matter how much pain I endured I smiled on the outside, it was my defense mechanism. I remember. (sic)”

2 Chainz has confirmed he has a new record on the way entitled 'So Help Me God', and has told fans to expect plenty of content from him in the near future.

Lil Yachty, T.I., 2 Chainz, and Nelly were among the rap elite who attended Kanye West's latest Sunday Service gospel breakfast in Georgia at the weekend.

Chicago producer No I.D. says that Kanye West will have a new album out before 2012 finishes.