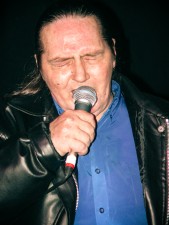 Wright, the legendary Easybeats singer and songwriter, died in the New South Wales coastal town of Moruya on December 27 from complications to pneumonia. He was 68.

The funeral of Stevie Wright is planned to be a celebration of the life of Australia’s first true international rock star. Wright rose to fame as singer for The Easybeats and cracked the US and UK Top 10 with the now classic ‘Friday On My Mind’ in 1966.

The pioneering Sydney band also featured Harry Vanda and George Young, who would go on to be the powerhouse songwriting team behind hits for John Paul Young, Wright as a solo act in the 70s and their own creation Flash & The Pan.

Stevie as a solo act would generate one of the greatest Aussie rock songs of all-time in ‘Evie Parts 1, 2 and 3’.

As per the family wishes, the funeral of Stevie Wright will be open to all family, friends and fans.

The Stevie Wright funeral will be held at St Andrews Cathedral, corner of George and Bathurst St, Sydney at 11am on January 8, 2016.

David Bowie Has Already Been Cremated, There Will Be No Funeral

David Bowie was given a 'direct cremation’ following his death on Sunday and there will be no funeral or formal memorial.

Paul Kilmister, the son of Lemmy Kilmister of Motorhead, gave a touching speech at his father’s funeral sharing anecdotes about the life of the man.

Lemmy Funeral To Be Streamed Live

Motorhead has announced that the funeral of Lemmy Kilmister, scheduled for Saturday at the Forest Lawn Memorial Park in Hollywood, will be streamed over the internet.

The funeral for Stevie Wright will be a public affair to be held in Sydney on January 8, 2016.

BB King will be farewelled at a memorial service is Las Vegas this Saturday.