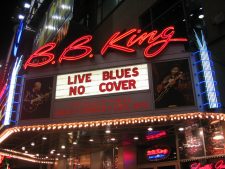 After 18 years of hosting some of music and entertainment’s most revered names, B.B. King Blues Club & Grill has announced its final run of shows in its current Times Square location (237 W 42nd St).

Due to escalating rent, the historic venue and supper club is forced to close its doors with a final performance on April 29, 2018. B.B. King Blues Club is in the process of selecting a new location in Manhattan to relocate the venue.

“It is with an extremely heavy heart that we share the news about B.B. King Blues Club’s closing. Despite many sold out shows, the location’s rent escalated to an unsustainable level, leaving us no choice but to close our doors. Unfortunately this has become a growing trend in New York City, with other iconic music venues and businesses falling victim to opportunistic property owners. This venue’s legacy extends much further than the stage, playing a role in Times Square’s revitalization two decades ago. It is a shame that wasn’t taken into consideration regarding its future in the area. Nevertheless, we feel extremely grateful for the overwhelming support we have received from both fans and artists over the years to create some truly historic and incredible memories in this space. We hope that we can find a new place to call home very soon so we can continue bringing live music to you all,” remarks Tsion Bensusan, Chief Operating Officer.

All shows scheduled beyond the April 29th closing date will be moved to various venues throughout the city. The weekly Sunday Gospel Brunch featuring The Harlem Gospel Choir, will give their two final performances at B.B. King’s on April 22nd & 29th. BB King’s is currently working with the group to find a new home for their weekly residency which will be announced shortly. Lucille’s Grill, located inside the venue, will remain open until April 29th and will feature sets by club favorites: B.B. King Blues Club All-Stars, Jon Paris, A Decade of Soul, and more.

Dallas based blues guitarist Smokin’ Joe Kubek has died just minutes before he was to take to the stage to perform in North Carolina.

California Honeydrops To Spread The Sounds Of New Orleans Throughout Australia

California Honeydrops have been around for about eight years now and spread the sounds of New Orleans (along with some San Fran funk) up and down the west coast of the USA.

B.B. King Was Not Poisoned

B.B. King's autopsy reveals he was not poisoned.

B.B. King Coroner Says There Is No Evidence Of Murder

Following allegations from two of the daughters of B.B. King, the Las Vegas coroner has confirmed said that preliminary evidence showed no sign that the blues great had been murdered.

Just days after the memorial for B.B. King two of his daughters are accusing his former business manager of poisoning the blues legend.

Blues legend B.B. King has been farewelled by family and friend at a memorial service in Las Vegas.