Paul McCartney Adds Japan Dates To His "Out There" Tour - Noise11.com 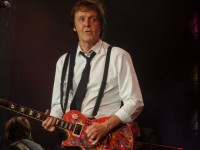 Paul McCartney has just added Japanese dates to his “Out There” tour making an Australian tour now very likely.

His last visit to the Land Of The Rising Sun was in November 2002, where he performed three sellout shows in Tokyo and two more in Osaka.

McCartney played his 17th gig of his “Out There” tour in Indianapolis on Monday night, and plays Milwaukee’s Miller Park this evening. His shows are legendary with nearly three hours of spectacular performances from what is arguably pop’s richest back-catalogue.

The “Out There” tour began 4th May in Brazil and McCartney and his band have performed in cities including Memphis, Warsaw, Verona (in a 1st Century amphitheatre), Vienna, Ottawa and Boston.

Four of the five Japan tour dates have been confirmed so far:

With just a mere 5086 miles (8184 km) and a paltry 10 hours and 3o minutes flying time between Tokyo and Melbourne, let’s hope that Sir Paul makes a welcome return to Australia soon.

The guitar that broke the hearts of many of Bob Dylan's fans and ushered him into the electric phase of his career will be put up for auction.