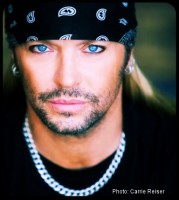 Poison frontman and reality TV vet Bret Michaels is talking about making a film about his life.

While Michaels has been on stage for decades as the frontman for ‘80s glam metal icons Poison, he’s also no stranger to the glare of the cameras. He was the bait for a three-season rock n’ roll dating reality show Rock Of Love, won the third Celebrity Apprentice season in 2010 and had his own personal show Bret Michaels: Life As I Know It in the same year.

Now, Michaels wants to go one better and go for the silver screen. He told the Columbus Dispatch that he’s interested in making a film about his life and struggles (including his long battle with diabetes and recent health scares).

“I want to tell the story,” he told the Ohio paper. “Mostly, when you see rock movies, it has to be this over-the-top thing. I want to give people a Bret Michaels movie where they see that my life is a comedy of errors. I also want to show my fans how to get through the kind of troubles that would leave most people flat on the floor.”

He’s also plugging a new album and there’s a video for new single ‘Get Your Rock On’ below.

Bret Michaels has teamed up with The Paradise Fund to help 200 families in need in the Coopers Town village on Abaco island, which was one of the places devastated by Hurricane Dorian, last year and Bret, 56, will fly his own plane to the island to personally deliver the gifts and supplies.

R.I.P. Bart Walsh of the David Lee Roth Band at 56

Bart Walsh, a one-time member of David Lee Roth’s band, has died at the age of 56.

Bret Michaels is grieving for his father, who died over the weekend.

Bret Michaels Records A Song For His Daughter

Bret Michaels likes to write music for his children.

Bret Michaels Has An Emoji Package For Fans

Emojis, those little graphics that are sprinkled throughout social media posts, are the current rage in the on-line world and stars and companies are starting to capitalise on the trend with their own emoji packages.

Bret Michaels is one truly dedicated musician, but sometimes it is to the detriment of his own well being.