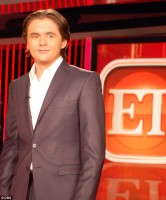 The 16-year-old made the comments after being complimented on his mature attitude during an interview with Entertainment Tonight reporter Brooke Anderson.

Prince has recently landed a job as a reporter for the U.S. showbiz programme.

“That’s what most of my people say,’ Prince told Brooke. ‘That was all thanks to my dad. He raised me right.’

Prince recently took on his first showbiz assignment, interviewing stars of the film Oz the Great and Powerful including James Franco and Zach Braff.

Brooke was on hand to give Prince some advice on interviewing techniques, and the teenager seemed excited about the novelty of asking the questions.

“I’ve been raised around stuff like this so it was different being the interviewer instead of the one being interviewed,” he said.

Prince revealed he dreams of becoming a director, as well as an actor, producer and screenwriter.

During his chat, Prince revealed he admires Oprah Winfrey and had learnt a lot from watching the legendary talk show host’s casual interviewing technique.

Prince also said his younger sister Paris, 14, and brother Prince Michael II, known as Blanket, 10, are a source of inspiration.