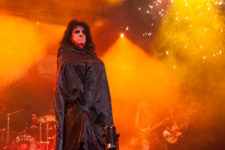 Alice Cooper has a few words with Brian Mannix and Kevin Hillier this week for episode 6 of the ‘Life of Brian … Mannix That Is’ podcast.

“I play at 5.30 in the morning and we are done by 9,” Alice says on Life of Brian. “When I stopped drinking 38 years ago, I had to find an addiction that wasn’t going to kill me. So I stopped drinking and drugging and all the rock and roll stuff. I had to find an addiction that was going to take 5 hours a day and wasn’t going to kill me. I went out picked up a golf club, took one swing and hit a 7 iron right down the middle and the pro said ‘You’re a natural.’ Ever since then I play five or six days a week.”

Alice was not only into top shelf alcohol, he had some top shelf friends to drink it with. “I was a member of the Hollywood vampires. We were drinking every single night up at the Rainbow in Hollywood. It was the regular gang. It was Harry Nilsson, John Lennon, Keith Moon, Mickey Dolenz from the Monkees and Bernie Taupin. That was the drinking club. It was such a normal thing to be drinking every night. Finally my body started going ‘Hey, we’re dying in here.’ I haven’t had a drink in 38 years, which is why I am still here.”

The Life of Brian podcast also features a chat with Jamie Redfern. “Michael Jackson asked to meet me. He was here with his brothers. He’s seen me in the States apparently and asked Molly Meldrum if he could meet me. So Molly rang me up one day and said ‘Hey Jim. Michael’s here. Do you want to meet him?’ And I said ‘Michael who?’ He said ‘Michael Jackson.’ I said ‘Are you kidding me? Who wouldn’t want to meet him? I am going to see his show tomorrow night.’ Molly said ‘He really wants to meet you. He said you’re the best singer he has ever heard.’ So we got together. I said ‘Has he ever played tenpin bowls?’ and they said no, never played it. I said ‘Would he like to learn it? I am pretty good at it. It’s what I have been doing in the States and Canada when I have not been working.’ Dad would always take me out as a pastime.”

Gavin Wood is also one of this week’s guests.

Listen to Life of Brian here.