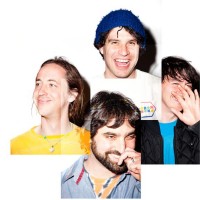 The psych band have been leading up to the release of Centipede Hz for a while, dropping an album trailer, a single, and an internet radio station.

And that is where they’re going to debut the album. Band member Avey Tare announced on his show on Animal Collective Radio, that they’ll be premiering the album next Monday 20 August at 11am EST. He also aired another couple of tracks and remixes, that are streamable on MixCloud.

The album will be officially released on August 31 on Domino Records and can be pre-ordered through iTunes and at JB Hi-Fi.

Check out the single ‘Today’s Supernatural’ below. Animal Collective will hit Australia next year on the Big Day Out.

Domino artists get the remix treatment from Justice, DFA, Dam Funk and more on a new double-album.

Big Day Out Sideshows For Killers, Band Of Horses And More

A new round of Big Day Out sideshows has been announced for The Killers, Bloody Beetroots, Yeah Yeah Yeahs, Band of Horses, Alabama Shakes and more.