Australian Albums : Delta Goodrem 'Wings of the Wild' Is No 1 - Noise11.com 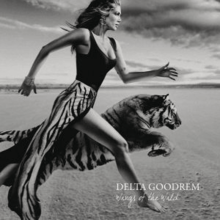 The fifth studio album for local singer Delta Goodrem entitled “Wings of the Wild” becomes her fourth No.1 album (and No.1 debut) this week, plus the eleventh for an Australian act in 2016.

This is the first No.1 this decade for Delta Goodrem, her first three albums all debuting in the top spot, “Innocent Eyes” (31-Mar, 2003, 29 weeks at No.1), “Mistaken Identity” (15-Nov, 2004, 1 week) and then her third set “Delta” (29-Oct, 2007, 1 week), whilst her fourth album “Child of the Universe” debuted and peaked at No.2 in early November of 2012. There has been no previous ‘Wings’ spreading at the top of the Australian Albums charts in an album title, but the band Wings did achieve two No.1 albums in the 1970’s, whilst this is the third time a ‘Wild’ has appeared in a title, both previously this decade with the Troye Sivan EP (14-Sept, 2015) and the Hillsong Worship album “Open Heaven / River Wild” (26-Oct, 2015). Delta’s new album also becomes the 201st by an Australian to hit the top and the 115th by a Solo Female act to make it to the top, the fourth this year and second by a local female for 2016, Sia being the other back in early February. And speaking of local female acts, Delta now ties in first place for the most No.1 albums by an Australian Solo Female artist with four No.1 albums alongside Olivia Newton-John, Kylie Minogue and Kasey Chambers.

We have three debuts in the Top 3 this week, so coming in at No.2 for a third time are Blink 182 with their tenth studio album “California”, which is the first to feature new lead singer Matt Skiba and is the bands first new material in five years. Previously the band have landed six Top 10 albums (now they have seven) two of which also debuted and peaked at No.2, “Take off Your Pants and Jacket” (18-June, 2001) and their last studio album “Neighborhoods” (3-Oct, 2011). Local X-Factor 2015 finalists In Stereo see their six track EP “The Speed of Sound” debut at No.3 this week, beating the No.11 peak that their first album “She’s Rock N’ Roll” debuted and peaked at back in April of this year.

After two weeks at No.1, the Red Hot Chili Peppers album “The Getaway” drops three spots to No.4 and the high debuts also pushes “25” by Adele and “Lemonade” by Beyonce down two spots each to No.5 and No.6 respectively. Of the nine weeks that “Ripcord” for Keith Urban has been in the Top 10 he has now rested at No.7 for four consecutive weeks, whilst the debut self-titled album for French artist Christine and the Queens debuts at No.8 this week after performing on Graham Norton (screened July 1st), the album first released in June 2014 and hitting No.2 in her home country, it was re-issued in the UK in late February of this year. “Thank You” for Meghan Trainor is down one to No.9 and dropping five places to land at No.10 is the Radiohead album “A Moon Shaped Pool”.

UP: The Hilltop Hoods album “Drinking from the Sun, Walking Under Stars: Restrung” jumps back up seventeen places to No.19 this week and ahead of their August tour the Macklemore and Ryan Lewis album “This Unruly Mess I’ve Made” leaps back up twenty-five spots to No.36. “Cry Baby” by Melanie Martinez is back into the Top 50 this week, up thirty-two places to No.45 and after it was screened on TV this past week, the soundtrack to “Guardians of the Galaxy” is back in at No.46, with the Disney on Ice tour of “Frozen” helping that soundtrack back up eight to No.47 this week.

Hillsong United debut at No.12 with a new live album entitled “Of Dirt and Grace-Live from the Land”, becoming the 29th Top 50 chart entry for the church group, and a few places lower at No.15 is “Americana” by local singer and guitarist Diesel, his fourteenth studio album and first to hit the Top 20 since his ninth set “Days Like These” (HP-17, Sept 2008), the song featuring covers of classic American songs by Bob Dylan, Johnny Cash, John Fogerty, Tom Petty, Bruce Springsteen, Neil Young and many more.

The fifth of six Australian acts debuting within the Top 50 this week is Sydney singer and songwriter Josh Pyke who has teamed with the Sydney Symphony Orchestra for his No.27 debut this week “Live at the Sydney Opera House”, which is his sixth albums chart entry and first not to debut within the Top 10. Another live album debuts at No.30 and is a collection from Eric Clapton’s performances at the ‘Crossroads’ Music festival entitled “Crossroads Revisited: Selections from the Crossroads Guitar Festivals”.

The final Aussie act entering this week is US based artist Grace (Sewell) and her debut album “FMA” (abbreviation of ‘Forgive My Attitude’) comes in at No.32 this week, the set also entering at No.42 in the UK this week, whilst new at No.40 are Bat for Lashes and “The Bride”, the fourth album for English group and third to chart here, plus their second Top 50 entry as their third set “The Haunted Man” debuted and peaked at No.21 in October 2012 and again in February of 2013. The final Top 50 debut this week comes in at No.49 and is the fifth studio album for US R’n’B singer Maxwell entitled “blackSUMMERS’night” and is the second of three similar titled albums, as his 2009 album “BLACKsummers’night” was the first (but failed to chart here), with this being the fourth entry here for Maxwell and first since his third set “Now” made it to No.32 in September of 2001, his best effort was his second album though, as “Embrya” debuted and peaked at No.20 in July of 1998.

Two new entries in the lower fifty this week are led at No.51 by Snoop Dogg and his fourteenth studio album entitled “Coolaid”, which becomes his fifteenth albums chart entry here (thirteen studio, one best, one collaboration) and first not to make the Top 50 since his 2009 tenth album failed to chart here. And the final entry this week is by Triple J unearthed singer E^st, whose debut EP “Get Money” comes in at No.96.

ARIA Albums: The Temper Trap ‘Thick As Thieves’ Is No 1

The third album for local rock act The Temper Trap entitled "Thick as Thieves" becomes the bands second consecutive No.1 album and third Top 10 set, entering at the top of the ARIA Albums Chart this week.