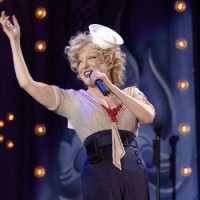 Bette Midler has kicked off her Divine Intervention world tour that will see her on the road in North America and the UK through until July.

The Midler Divine Intervention tour focuses around Bette’s new album ‘It’s The Girls’. Never one for the greatest hits package, a Bette Midler show is about delivering themed entertainment with the songs chosen to reflect the various sketches and dialogue within the performance.

Here is the setlist from Bette’s first show in Florida on May 8, 2015.

Bette will perform a second show at Hard Rock Live in Hollywood, Florida, Saturday May 9.

Bette Midler and Gloria Estefan are among the stars taking part in the virtual AIDS Walk: Live From Home livestream show, in support of those affected by HIV and AIDS.

Bette Midler kicked off Stevie Wonder's 70th birthday celebrations on Wednesday by sending him a heartfelt message on social media.

Bette Midler will perform the nominated Mary Poppins Returns song at the Oscars.

Sir Paul McCartney has joined the millions of protesters across America speaking out about American terrorist organisation the NRA in the March For Our Lives rally across the USA this weekend.

Music legend Bette Midler is having a lot of fun today at trump’s expense. She just can’t put Michael Wolff’s ‘Fire and Fury’ down.

Bette Midler has shared a piece from a 1991 interview with Barbara Walters where she claims talk show host Geraldo Rivera has drugged and groped her.