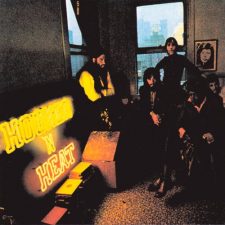 Fito, the only continuous member of Canned Heat since the band started in 1967 tells Noise11.com, “There is a whole story behind the photo session for that album cover. Firstly we hired an old, funky apartment in downtown Los Angeles because we wanted to have that grim aspect to it. We were hurting. Alan Wilson had just died. Alan didn’t even get to hear the record finished. He wasn’t there when we mixed it. He was there for the recording but he died before we mixed it”.

All of the doctoring was done manually. Remember this was decades before technology allowed you to change an image in a computer. “There was no photo-shopping back then,” Fito said. “It is easy to mess with that today but we are talking 1970. That kind of technology was not around. We got a picture of Henry and cut the face out and put it on that body standing with us with John Lee Hooker and myself”.

Canned Heat are one of the original Woodstock bands returning for Woodstock 50 in upstate New York on August. They will tour Australia in May.