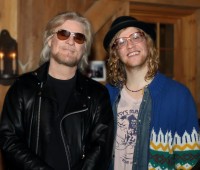 Fresh from his first trip to Australia in two decades, Daryl Hall is heading out on the road in the USA with Sharon Jones and Alan Stone.

The Live From Daryl’s House Soul Review with Hall, Jones and Stone will kick in for 6 dates from April 11.

Alan Stone is also Daryl’s guest on the 51st episode of Live From Daryl’s House. Allen says, “What is there to say about Daryl Hall? The man is a legend. Getting the opportunity to be invited to sing with him was such an honor. I was overwhelmed at the experience to hang out with someone who has been so influential on my own career.”

Daryl is a fan. “We share a love of the same kind of songs,” says Hall. “I’m really impressed with his commitment to the form. I predict big things for Allen in the future.”

The two collaborate on a six-song set that includes “Ennui on the Mountain,” a track from the band’s 1975 RCA album, Daryl Hall and John Oates, with the silver foil cover, and “Lifetime of Love,” from Hall’s recently release critically acclaimed solo album, Laughing Down Crying. The other four numbers are Stone originals, including “Unaware,” “Celebrate Tonight,” “Say So” and “What I’ve Seen.”

Check it out at livefromdarylshouse.com