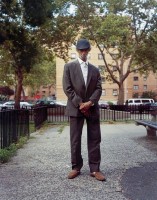 Gil Scott-Heron Autobiography On The Way

Gil Scott-Heron’s autobiography will see a release this January, eight months after he passed away.

The book is called The Last Holiday: A Memoir and details Scott-Heron’s 1980-81 tour with Stevie Wonder during which they campaigned to get Martin Luther King, Jr.’s birthday observed in the USA and also talks about the singer’s part in the civil rights movement.

It will be released on January 16, 2012 through Canongate books.

Scott-Heron’s music was a post-soul jazz-infused mixture of styles that had elements of rap years before the term was coined.

His last album was the 2010 release I’m New Here, which was remixed in its entirety by Jamie xx.

Scott-Heron died in New York in May this year at the age of 62.

Check out Gil Scott-Heron talking about his life with the owner of Canongate Books, Jamie Byng below:

Bad Religion turn 40 this year and will celebrate with the release of an autobiography entitled Do What You Want: The Story Of Bad Religion.

Morrissey Autobiography To Be Released In USA

Morrissey's smash Autobiography, which is selling beyond expectations in the U.K., will be making its way to the U.S. on December 3 via Penguin Random House.

Morrissey Autobiography Will Be Released In UK And Europe

Who knows what the original reason was for the Thursday post on the True to You site, Morrissey's main career mouthpiece, but there appears to be a bit of scrambling being done over the wording.

The Autobiography of Morrissey is no longer going to be released.

Pete Townshend Of The Who Prepares Autobiography

Who guitarist Pete Townshend will release his long-awaited biography in October.

Electro agitator M.I.A. tweets to fans about her fourth album, a doco, an autobiography and an art exhibit.