Glen Hansard And The Frames Return To The Opera House - Noise11.com 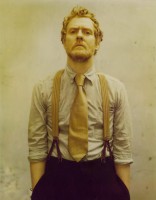 Glen Hansard And The Frames Return To The Opera House

Oscar-winner and half of Swell Season, Glen Hansard, brings The Frames back to the Opera House.

The Irish troubadour joined the Byron Bay Bluesfest on March 29 next year and he’s now announced a return to the Sydney Opera House, with his band The Frames.

This is on the back of this year’s solo debut Rhythm And Repose, which follows up his teaming as The Swell Season with Markéta Irglová, which went on haitus last year. His first and main band The Frames will be along for the ride to help him flesh out the tunes. In addition to this, revered Irish singer Lisa Hannigan will support.

The play the Concert Hall in the Sydney Opera House on Monday 25 March, 2013. Tickets will go on sale from 9am next Monday 15 October.