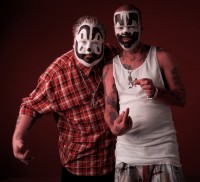 Renegade US cult rap duo Insane Clown Posse have announced that they will sue the FBI.

According to Spinner, the trouble-making twosome who have built an empire with their Gathering Of The Juggalos festivals in the US, are suing the FBI to clear their fans’ names.

It has transpired that the bands’ fans, dubbed juggalos and juggalettes, have been singled out as a “loosely organized hybrid gang” and a “criminal organization formed on the street,” in the FBI’s 2011 National Gang Threat Assessment.

In response, Insane Clown Posse are suing the Bureau to get their fans removed from the list.

Violent J from the band said in an interview, “We’re suing the FBI to be taken off their list. They’re trying to kill our band, and we have to fight back.”

They have launched a website named Juggalos Fight Back where they are asking fans to report incidents where authorities have singled them out for being fans of ICP.

The site says, “If you or someone you know have suffered any negative consequence with a governmental representative, including law enforcement, border patrol, airline security, or other local, state or federal governmental agency or employee as a result of your status as a Juggalo, we want to know about it.”

“If you would like to share your experience and to have your situation reviewed by our legal team – at no charge to you – please fill out our short questionnaire.”

Facepainted fans can hit Juggalos Fight Back for a bit of street justice. And others can get a taste of the mayhem below. Very NSFW language.

File-Sharing Site Megaupload Has Been Shut Down

Leading file-sharing website, Megaupload, has been shut down by US federal prosecutors.

Mark Hoppus Wanted To Be In FBI

Mark Hoppus says his favourite book made him want to 'put on some gloves' and 'catch killers'.