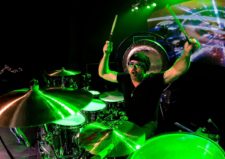 Jason Bonham, the son of the late Led Zeppelin drummer John Bonham, has apologised to his dad’s co-founder Jimmy Page for describing instances with hard drugs via Page as a kid on tour with Led Zep.

Jason made the comments on Howard Stern’s radio show on April 9 but now takes back what he said, saying it was not true.

Bonham claimed Page introduced him to cocaine and described a debauched lifestyle. “We got called to his room,” Bonham told Stern. “There was a woman on the floor with a collar on, meowing, and he had this grinder thing and he turned it over and he went, ‘Here you go,’ and I went, ‘Thanks.’ He’s like, ‘You’ve done this before, right?’ And I’m like, ‘Yeah, of course I have.’ So he handed it over and I just did all of it, and he went, ‘Just like your father — y’know, that was supposed to be for all of us.’”

In a statement that reads more like it was written by a lawyer than heartfelt, Bonham now says he made it up. (Mr. James Page???, really? Jason wrote this?)

On or about 9 April 2019 I, Jason Bonham, gave an interview on radio with Howard Stern (the Interview). In that interview I made certain untrue and derogatory statements concerning Mr. James Page (aka Jimmy Page) of the legendary band Led Zeppelin.

I unconditionally retract all derogatory and defamatory comments relating to Mr. J Page that I made in that interview. In particular it is wholly untrue that Mr. J Page offered me any illegal substances either when I was a minor or at all. I apologize to Mr. Page, unreservedly, for making these unfounded and untrue comments about him. Out of my long held respect for Mr. Page I will make no further comments on the Interview and I agree to make no further comments which Mr. Page might view as disparaging, either now or in the future.